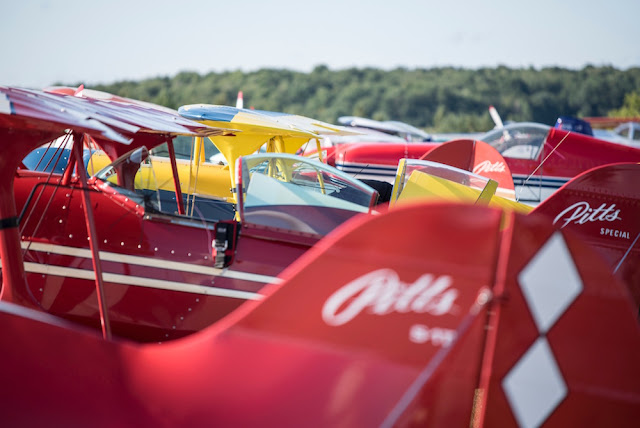 We almost didn’t have a contest! The weather gods challenged us during the week preceding our pilgrimage to the Hanover-SaugeenAirport for Aerobatics Canada Chapter 3’s annual event.
The plan was to get there Thursday to set up the box markers (that outline - on the ground - the one thousand meter cube in which we must do our flying); then get the paperwork and other things ready for the contestants who usually arrive on Friday. Bill Ludwig, HellaComat and Andy Ernewein (all flying Pitts S1’s) were able to fly into CYHS before the rain and low clouds showed up. Along with airport manager Dave Kennedy they were able to get the markers out but got pretty wet in the process.

Francois Marquis came from Montreal with a tailwind (!) in his beautiful new (to him) Cap 232. Larry Ernewein fought with a bad magneto on Thursday then fought the Friday morning weather in his open cockpit Bucker Jungmann and arrived before the clouds and rain again shut down arrivals. Late afternoon the weather improved enough for our ‘Unlimited’ American friends Hugo Ritzenthaler (Pitts S1E) and Klaus Mueller (Yak 55) to land, and as the evening progressed Ryan Chapman and Scott McMaster showed up with their DR 107’s. Kelly Fawcett and Hans Juergensenflew ‘Sportsman’ in Ryan’s One Design and Andrea Kuciak flew Scott’s One Design in ‘Intermediate’. Chris Pulley and Desmond Lightbody brought their Pitts – an S1 and an S2 – and first-time competitor Hugh Reynolds showed up in a Decathlon. After registration and inspection the pilots usually want to practice in the box. Low ceilings prevented this, and Friday night saw all 12 aircraft safely put to bed in the large hangar that Rob Olds once more allowed us to use.

The forecast for Saturday was poor but the silver lining to this was that the usually scheduled Saturday 0700 briefing was delayed to 0800, meaning we could stay up later and party -  which we did at Walkerton’s wonderful Best Western hotel (our sort-of ‘official’ host). 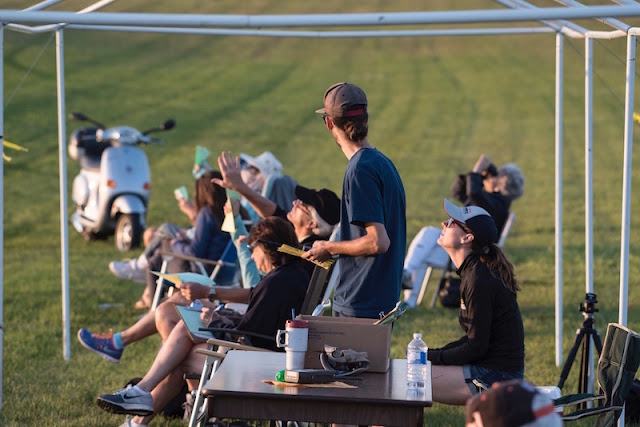 At the judging line.  (Photography by www.katiesanderson.com)
A clear sky and unlimited visibility greeted us in the morning and immediate thoughts of “Gee, we really blew this!” went through everyone’s mind. But by the time we got to the airport low clouds and rain had re-dampened our spirits. And things stayed that way until 1500 when it appeared we might be able to get airborne around diner time. So the briefing was done at 1630, aircraft moved to the flightline, judge’s stations set up and by 1800 our starter, Pat Rebetoy(whose ‘other’ job is president of Aerobatics Canada), was launchingflights into the box. The Known was flown by Advanced, Sportsman and Intermediate pilots. Darkness and hunger prevented the Unlimited machines from getting into the box, and the Saturday night banquet was held in the airport restaurant – now under new management and called “Tilly’s”. Food and service were simply fantastic both for the banquet, and for feeding all our people during the entire contest.

During the banquet the Contest Director – Ryan Chapman – and Chief Judge – Sandy Langworthy – had to discuss the fact that Sunday morning we would have a problem: There was only enough time for one complete program – either the Free or the Unknown. Many contestants had to leave by 1500. Should we distribute the unknowns and ask the Unlimited pilots to fly their Known in the morning then their Unknown after lunch ; or do we fly the Free program. The Unlimited guys decided for us – flying both would be too much stress and perhaps affect safety. So the Unlimited Known started the day and then the Free was flown by all categories. 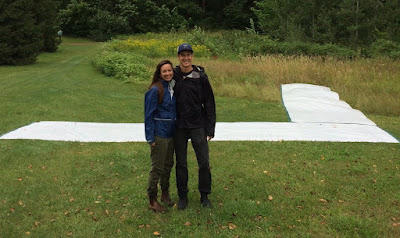 Meghan and Andy taking down one of the box markers in the rain...
Though the public is not specifically invited to aerobatic competitions, many people do arrive to see what’s going on. Itinerant aircraft continued to fly in and out of the Hanover airport during the contest, and one of those planes was flown by our friend, and sponsor, Bill Davidson of National Aviation Insurance Brokers. He left several bright yellow tee-shirts that quickly disappeared!

We finished at 1300, then put several members and volunteers to work taking down the box markers and judging stations.  Everyone then had lunch – except Elaine Ernewein who was busy on the computer inputting the scores. The highest scoring Canadian competitor in each category is the Canadian National champion: 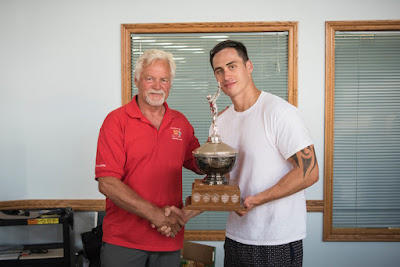