The first (ever) Southwestern Ontario spring training camp with Sergei Boriak, world renowned pilot and aerobatic coach wrapped up on Sunday with great success. Three days were spent training in Tillsonburg, where Sergei provided coaching to Bjarni Tryggvason, Rick Volker and Mike Tryggvason. With Sergei's precision coaching style and some encouragement of 'wait, wait, wait, now go, hard!', progress was made by all.

On the first day of the camp, the Tillsonburg news came out to see what all the commotion was about. Jeff Tribe produced a segment on aerobatics, mentioning Aerobatics Canada Chapter 3 found here:

On Friday, the second day of the camp, Tillsonburg hosted a unique assortment of machines driven by Canadian pilots, including Bjarni and Mike's Pitts S2A, Rick's Sukhoi, Pete McLeod's Edge, and Larry Ernewein's Bucker Jungmann. An aerial photoshoot was organized that day with Eric Dumigan calling the shots from a Cessna 182 camera plane piloted by Dave Mcmillan, out of Burlington, Ontario. The resulting photo collection can be viewed on Eric's site: http://www.airic.ca/html/2011atc.html

In addition to the flying, Sergei was hosted as a guest to Southwestern Ontario, visiting the RAG Hangar in Niagara-on-the-lake to see an exquisite collection of World War Two warbirds; sharing a supper with a number of members of the Southwestern Ontario aerobatic community in Kitchener, and going for a weekend afternoon hop in Larry Ernewein's pristine Bucker Jungmann. Reflecting on the weekend, Sergei noted that he had a very enjoyable experience during his stay in Southwestern Ontario and looks forward to returning for future training camps. 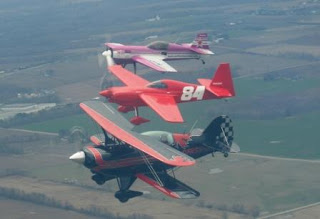 In hindsight, the coaching from Sergei was invaluable. His expertise and sharp eye ensure camp participants put a healthy initial polish on their known and free sequences early in the season. Mike recommends that there is no 'right' time to try a camp with Sergei, the opportunity alone is the best time to spend a few days being watched by him. While Sergei does not usually provide in-plane instruction, his coaching from the ground is guaranteed to improve the performance of novice and expert alike.

Any interested parties be sure to contact chapter president Mike Tryggvason at aerobaticscanada.ch3@gmail.com to book for 2012's camp!
Posted by Aerobatics Canada Chapter 3 at 22:42